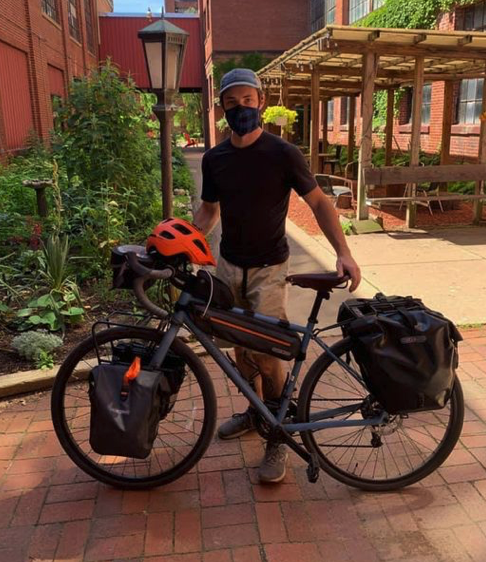 Two Williamsport natives have been helping out in the Bicycle Recycle shop here at the Pajama Factory and are about to embark on an awe-inspiring journey from here. Collin Shableski, and Russell (Russ) Michaud are embarking on a 12,000 miles trip, all of which they will be traveling on bicycles. Peddling for 12,000 miles- impressive! Their mission is to spark inspiration for others to start their own journeys on a bicycle, whether that’s just on the RiverWalk or across the country.

Collin and Russ are starting their journey by peddling south to Florida, tentatively embarking on November 1st, 2020. Just in time to beat the blistery cold northern winter. From Florida, they will chase the sunsets into the horizons, until they are welcomed by the Pacific Coast, all the way in San Diego, California.

The Pacific Coast Highway runs along the edge of the entire Western Coast of the U.S., starting in Orange County, just north of San Diego. This Coastal Highway winds up and down 1800 miles of scenic cliffs overlooking the Pacific Ocean. This breathtaking route ends in Northern Washington State, close to the U.S. border shared with Canada.

From Washington, this daring duo sets sail for Maine, the Northernmost state on the Eastern U.S Coast. Ultimately, arriving in Bar Harbor, Maine, roughly 11,275 miles from their starting point.

The route back to their home in Williamsport, Pennsylvania, is roughly 725 miles. Ideally, they plan to make this 12,000-mile, roundtrip journey in 5 months. Along the way, they will be reuniting with friends and family and savoring their hospitality. They hope to successful with the apps WarmShowers and Couchsurfing. These apps help connect travelers to willing hosts along their route. Whereas, the majority of the nights will be spent in a tents-wherever they can seek shelter. Whenever they do end up cruising back into town, their community will be eager to hear the tales from the trails. From the trail, Collin and Russ will be sharing their journey through various social media platforms

Hopefully, their story inspires you to pick up a bike and see where it takes you.

Pictured is Collin Shableski, and his bicycle.